tl;dr: Random splits are common, but maybe not balanced enough for some use cases. I made a python library for balanced splitting.

Random numbers are cool, and also useful for a lot of stuff. Among others, whenever you want to balance things in some manner, random assignment is a good first choice. A load balancer which assigns tasks randomly to servers would fare quite well. This is such a simple and powerful idea that the ideas of balance and randomness are often mixed, and we perceive the results of a random process as balanced. And they are balanced - on average. Sometimes that’s good enough, and sometimes it’s not.

This article, about random numbers in game design, provides a great example of a situation where an innocent random process leads to undesired behavior. Using random(0, 1) <= 0.1 to determine the outcome of a positive event which should happen 10% of the time sounds about right - the player will need about 10 attempts, maybe a little more, maybe a little less. The “little less” part is no problem, but if we zoom on the “little more” we see that the tail of the distribution is long - 12% of players will have to make more than 20 attempts, twice as many as we (presumably) intended. If the game is long and contains, say, 100 such events, then 40% of players will experience at least one instance where they will need as many as 50(!) attempts. Definitely not what we want. So randomness has to be controlled.

Several years ago I was responsible for an intensive, several-month training course of about 100 students. The students are divided to several groups which become their primary environment within the training - lessons are held for each group separately and the instructors are fixed per group, and get to know each student quite well. There was a general consensus that the groups should be balanced, both in demographic composition and with respect to several different aptitude tests.

There was no established process for splitting the students to groups - some of my predecessors used random assignment, others performed the split manually with an Excel sheet. The person who was in charge of the previous training complained that the groups weren’t balanced, with some containing a greater percentage of weaker students, creating excessive load on the instructors of those groups and higher dropout rate in those groups. They also said that, in hindsight, the group imbalance could already be seen in the groups’ aptitude test distributions.

Fearing that some random fluke would mess things up, I started with a random split and spent about 3 hours manually balancing the groups (the schedule was tight and I didn’t want to risk getting lost here), and (related or unrelated) things turned out fine. But it was very tedious, and frustrating enough that when I had the time I wrote a script to automate the task, performing a heuristic search for a split that minimizes the distribution differences between the groups.

Here is an example of using (crude) simulated annealing to search for a split that is “balanced”:

Comparing the optimized split to a random split

Here are 3 runs of a random dataset generation, and comparison of the optimized split with a random split: 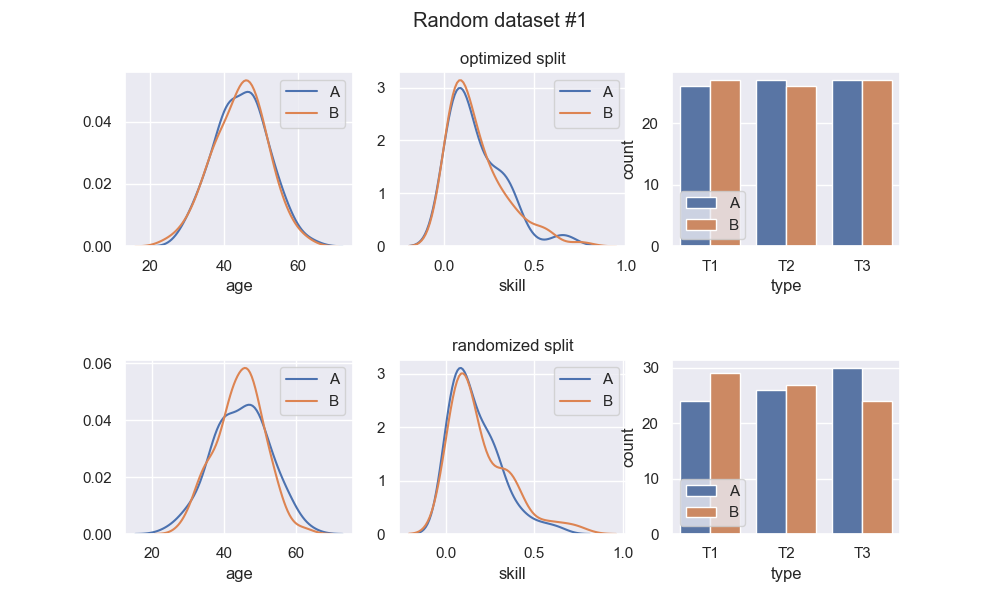 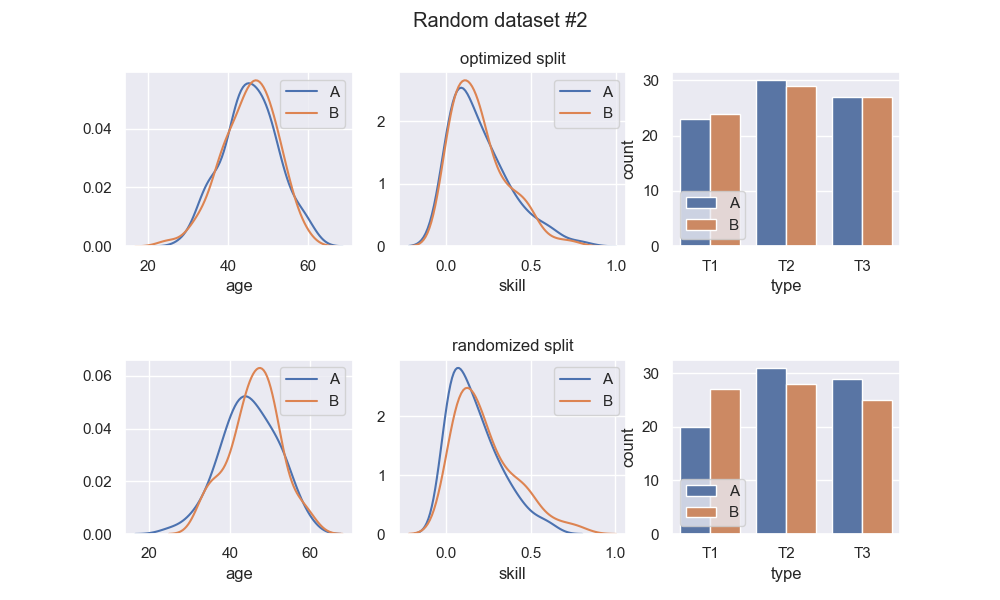 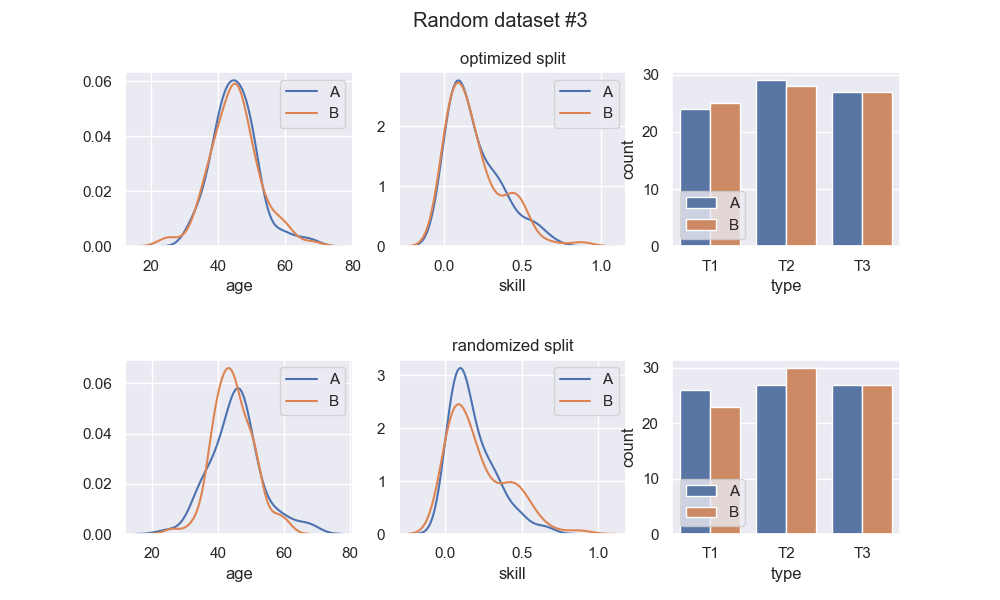 Randomized controlled trials are a type of experiment which relies on random splitting to reduce bias. For any single trial it is unlikely that a random split will create an imbalance in exactly the “right” aspect and direction to significantly change the conclusions. But it’s certainly possible, and in aggregate, over thousands of trials, it’s much more likely to happen sometimes.

To get a feel for whether and how much splitting strategy could affect the conclusions of randomized trials, I ran a meta-experiment simulation where each experiment had the following set-up:

The null hypothesis (that the treatment is ineffective) is rejected if the p-value of a t-test on the target value is less than or equal to 5%.

Using a random split, 1172 experiments (out of 10k) arrived at the “wrong” conclusion - 113 false positives and 1059 false negatives. Using the optimized split, 1088 experiments arrived at the wrong conclusion, with 63 false positives and 1025 false negative. We see a significant reduction (almost 50%) in the false positive rate, which confirms that splitting strategy could affect an experiment’s results. Remember that this is a toy simulation and the numbers can depend a lot on the specific experiment set-up simulation - the key takeaway is that splitting strategy can affect the conclusions at all.

This could easily seem like a minor point - most of the time, random splits are perfectly good. But the ongoing replication crisis, which involves many fields in which small-n experiments are quite common, is pushing us to double-check many assumptions and currently-held best practices. Random splits are very common, and performing them in a more balanced fashion doesn’t require much effort. As the crisis probably stems from many different factors, I think it’s a good idea to start adopting various practices aimed at making experiments more robust, and balanced splits seem to be a good candidate.

To help facilitate balanced splitting, I created a python library - balanced-splits (github) which does just that:

If you have any questions regarding its use or suggestions for improvement, feel free to contact me.